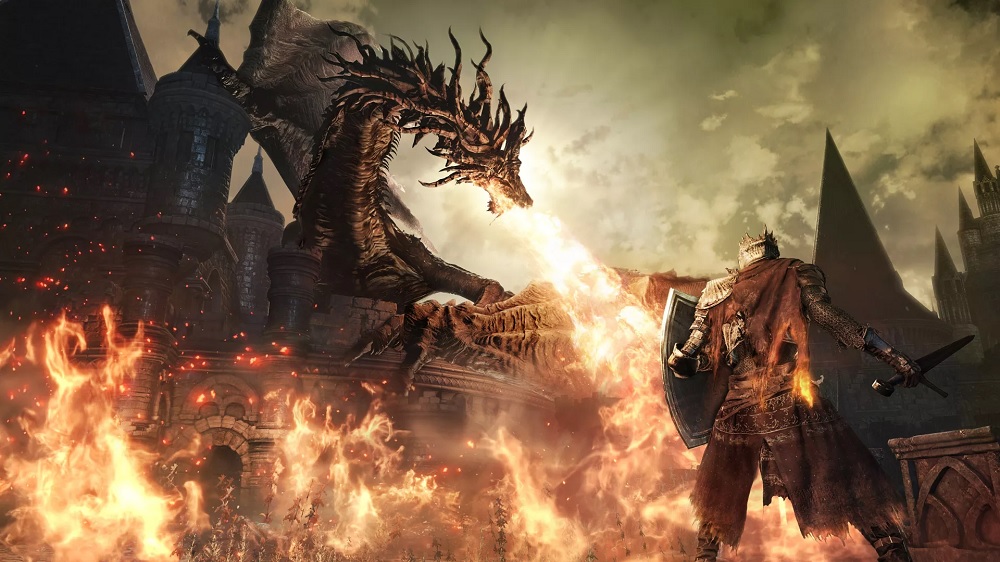 For everyone else, the Dark Souls III  hype is starting to die down. For me, the hype is just beginning. Being separated from my “Master Chief” behemoth of a PC until just this week, I’ve been binging Dark Souls III PVP videos while at the same time hiding from Twitch streams and playthrough’s, in some desperate attempt to both sate my overwhelming desire for this game and not spoil anything. To help scratch my itch, I decided to revisit the most recent installment of the series to better prepare myself for the hurt I would inevitably experience when I pick up Dark Souls III later this week.

The Soul’s games are notoriously difficult, and its difficulty is one of its largest draws to consumers. Firing up Dark Souls II again felt like a mix of nostalgia and dread: like doting on your family pet again when you come home from college, only to be starkly reminded that the feeling isn’t mutual when it bites you under the table.

Dark Souls II bit me under the table more times than I was comfortable with. It bit me so many times I was ready to turn off the game and forego getting the “much anticipated” sequel. I died. I got bitter. Yet after each rage quit, after each explicative, after each therapy run to Taco Bell and consolatory milkshake, I kept having the urge to give the game another chance. But why? “The game isn’t even fun”, I told myself. And I still tell myself that. The Souls games aren’t fun. They’re just not.

But the Souls games are fair, and they are rewarding. And that’s what makes them so great. Let’s start with fair.

As much as I hate to admit it, the Souls universe is consistent. Sure, encountering a new enemy or entering a new map will inevitably result in your death a few times, just due to the fact that you have no idea how this enemy behaves or what the rules of this map are. But that doesn’t make the game “unfair”. All that proves is that the game is difficult. FromSoftware took this difficulty into account by making every monster and boss play by the same rules. Namely, monsters and bosses in the game are designed for melee combat, and having a character be ranged is a mechanically built in “easy mode”. By having the Souls games difficulty be determined by weapon choice and playstyle, the player who chooses to utilize this easier form of play feels clever and rewarded, as opposed to feeling like they’re playing the game wrong. Additionally, FromSoftware created a system for those hardcore players who enjoy the difficulty, by including items like bonfire ascetics that make the mobs and bosses tougher to take down. All of this combined makes the Souls games notoriously challenging, yet always giving the player a way out and a way to progress. It’s that process of being rewarded for progressing that’s the second half of why the Souls games are so addicting to play.

In terms of being rewarded, I discovered that playing the Souls games were a lot like working out. For most people, myself included, working out is the means to an end. I don’t enjoy the work out and exercise itself: I enjoy the physical and emotional results of it. The Souls games operate under the same principle. The difficulty of learning each enemy’s move set, the frustration of getting lost, and the infuriating anger of being invaded by other players, makes overcoming those obstacles so much sweeter.

Landing a parry or a backstab is only downright epic, because you know how hard they are to land. Finding the right path or the right item is such a rush because you know you’d still be struggling with your mace if you didn’t find that chest or nab that drop. The whole concept of invading works so well because both the invader and the invaded knows exactly what its like to be in their opponents shoes. It’s this overcoming of adversity and being rewarded for it is what makes the Souls games worth playing.

This “rewarding for overcoming” mindset and motivator of play isn’t limited to combat, either. The lore of the Souls games are rich and lush, and the NPC’s and their interactions with each other are vibrant and downright delightful. Unfortunately, these interactions and plot points require significant detective work to unveil. Experiencing anything more than cryptic warnings or one-liners requires the player to read every form of flavor text they can find. This ranges from reading random tombstones, talking to NPC’s multiple times (and after different events) and reading item, weapon, and spell descriptions. If a player really sinks their teeth into the world they’re exploring, the game springs to life. The game is, wait for it, more rewarding to beat and play through if you assemble the cryptic narrative puzzle pieces, and have a fundamental understanding of the world and its characters.

All in all, the Souls games are the most rewarding game I’ve ever played, as well as some of the most addicting. It’s fair and consistent, and the story grapples with themes and messages you wouldn’t expect in a videogame. The “fun” of the game is found in overcoming challenges: but those challenges are going to completely and utterly destroy you. You’ll rage. You might break something. But I can’t wait to do the impossible and beat the unbeatable. I can’t wait to get my hands on Dark Souls III, and I can already taste those inevitable consolatory milkshakes. Happy playing!

In an age of cynical millennials, armed with only his wit and his prose, this daring adventurer scours the globe for experiences beyond puffing air out your nose while you read. Passionate and lively, when he's not writing Josh can be found playing League, RPGs, and binging anime.

Follow @GameSinnersLive
Paragon is blowing up the MOBA scene
Furi Release Date Announced
We use cookies to ensure that we give you the best experience on our website. If you continue to use this site we will assume that you are happy with it.Ok