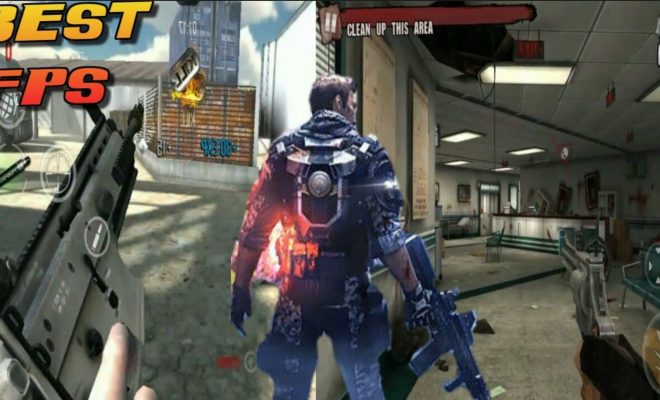 Who doesn’t love a good First-Person Shooter game? There is no better way to unwind after a hard day than by blasting some bad guys to kingdom come. But now you don’t have to wait to get home from the office to start shooting the place up. Thanks to the power of the smartphone, you can enjoy the best in FPS entertainment wherever you are, whether it be on the train home or on a cheeky bathroom break.

The selection of FPS games on the Android platform has increased dramatically in the last few years, making mobile gaming an option for even the most hardcore of shooter fans.

Shooting zombies is perhaps the best kind of FPS game, since the targets are already dead, so you need show no mercy. Into the Dead 2 builds on the mechanics of the first title, as you try to survive running through a field of zombies, with plenty of weapons to unlock and upgrade. However, this time round the game also includes engrossing strategy elements which will keep you engaged, as well as a trusty canine character to keep you company. With excellent graphics and multiple satisfying endings, Into the Dead 2 is the real deal.

When this one came out back in the mid-90’s, it redefined video games. Although there have been newer and better releases since, nostalgia fans will be delighted to know that the original is now available to download for free on the Google Play Store. The neat thing about the original Doom is that the controls were always pretty limited, which makes it ideal for mobile gaming, and the scares and thrills are just as real as they were back in 1993. So, get ready to slay some demons and imps on your mobile device.

One of the most popular FPS games of all time, the Call of Duty franchise has spawned everything from action figures to a real-money slot game and now a dedicated Android App. The Heroes title combines the best of FPS games with the best of the RTS world, as you will command an army of legendary heroes, elite soldiers, and devastating drones in a 3D combat strategy game. Heroes such as Price, Soap, and Harper all feature, and if you like base building as well as blasting away at enemy combatants, then this game is a must.

This freemium game features a beautiful cartoon style which is quite charming, as well as a variety of weapons and an online PvP combat mode. While the loot box system is annoying, the simplicity of the (optional) automatic shooting function is pleasing while playing on a mobile device. Literally, all you need to do is aim, and your selected weapon fires at the bad guys. This is a fun way to pass the time while waiting for a doctor’s appointment.

One of the more unique FPS games out there, Hitman Sniper is a classy way to kill lots of virtual people. As the name suggests, this is a classic sniper title, so your character doesn’t run around like in most FPS games but instead finds himself overlooking various buildings, taking out high-value targets. This slower pace is perfect for a lazy evening of shooting bad guys at your leisure, as a female assistant congratulates you on your performance in an upper-class English accent. With over 150 missions, several sniper rifles to unlock, leader boards, and a little bit of strategy, Hitman Sniper is the game to play for all Day of the Jackal fans.

Which FPS games would you like to play on your Android device? Classics like Goldeneye or Quake?

Let us know in the comments.

Follow @GameSinnersLive
How to Get Free Skins and Sell Them for Cash?
Everything You Need to Know About the Overwatch League
We use cookies to ensure that we give you the best experience on our website. If you continue to use this site we will assume that you are happy with it.Ok