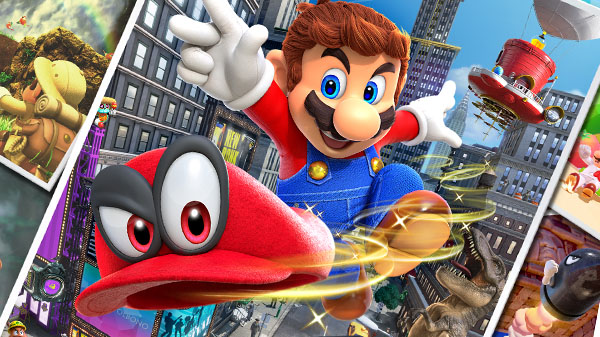 In case you forgot or didn’t know, Super Mario Odyssey came to Canada this week. The Ontario and British Columbia demo kiosks were set up to give Canadians a taste of the game during E3 week. I’ve just gotten back from the demo station in Ontario and was lucky enough to play the game for more than the designated time. There’s a lot to cover, but I have to say that I was extremely, extremely impressed with what I played.

First off, how the demo stations work is that you are given a time slot of 15 minutes to play. After waiting in line on Sunday (for nearly 2 hours) to register, I arrived this morning back at the spot to play some Mario. But, probably because not many people registered for the morning slots, there were free spaces ready for me to take. So all in all, I got to spend 60 minutes across 4 different sessions playing Super Mario Odyssey. I was able to take in a lot of what the demo has to offer, though no where near scratching the surface.

So this is how the demo works exactly. You have a choice of 2 stages to select, and you can only play in that one area for the entire 15 minute session. The sand level, as displayed below, and the metropolis stage called New Donk City where the sections available. I chose New Donk City on my first run, thinking that it would offer more of the new large scale exploration. But as I found out I could play again, I went with the desert stage on my 2nd try. My 3rd session was back to the city, and my final 15 minutes was in the city again. I tried my best to gather and absorb as much as I could from the demo. And, my goodness, is it ever dense and jammed pack with content.

The desert stage of Super Mario Odyssey was a colorful spectacle of hazards, challenges and secrets.

Every player is accompanied by a guide at the station who provides tips on the controls, as well as hints on easter eggs. I was told by one of the kiosk attendees there that she spent over 4 overs playing the Mario demo discovering things. Another man working there apparently spent over 10 hours trying to exhaust what the demo had to offer. That’s how much content is in this small fraction of the game. And it’s quite believable when you realize how much you’re allowed to do from the get-go, despite the 15 minute time limit. Moons, the main collectibles of Super Mario Odyssey, are everywhere. There are dozens of minigames, platforming challenges and obstacles to overcome. Choosing which path to take when you only have 15 minutes (or an hour) can be overwhelming. But no matter where you’d go, there was always so much to do.

And quantity is hardly what this game does best. The amount of variety and new concepts introduced in this game is practically incalculable. Mario has several new abilities like a rolling dash where he curls into a ball. It’s essentially the “run button” of this game, and it meshes with his jumping abilities very nicely and smoothly. The hat, Cappy, has several offensive and mobility-based abilities that make Mario’s overall movement feel much more expansive and satisfying. And of course, Cappy’s main ability to allow Mario to possess objects and creatures is just full of potential. This one mechanic has more to offer than some entire games do.

The Nintendo Switch kiosk where Super Mario Odyssey was demo’d.

As shown in the new E3 trailer, you can possess many things. I managed to assume control of bullet bills, a pedestrian of New Donk City, and a sewer pipe grate. Each one has a unique ability to interact with the world. Some act like traditional ability upgrades, and some are dedicated minigames, or entrances to specific locations. It’s as if Mario just received a hundred new power ups akin to the fire flower.

New Donk City was the more introductory and easy stage of the two. But it also showed off more new ideas unique to Super Mario Odyssey. The desert stage was based off more old school and traditional Mario games. It emphasized skill based platforming, was more linear, and featured many more enemies. As I watched other people play the game in order to see as much of the demo as possible, both worlds were chosen fairly equally. I personally preferred New Donk City for it’s open level design, and the new ways it allowed Mario to explore his surroundings.

There is a lot I like about the newness of this game. The coin system, for example, is greatly improved. Instead of merely giving you health or points, the coins are actually money this time. But, they are also tied to your extra lives. A death costs you 10 coins, so it forces you to balance your extra lives along with your currency to spend on items. The demo allowed you to enter stores from the get-go where you could get costumes like the black suit and fedora, or even a health boost. The extra mobility moves and attacks will make controlling Mario more interesting and thoughtful. Plus Cappy’s ability to control so many different things makes player interaction reach new heights. Even from just an hour of playtime, it’s clear the amount of effort that went into this game was utterly colossal.

I think Super Mario Odyssey will be a breath of fresh air for Mario games similar to how Breath of the Wild was to The Legend of Zelda. With the more expansive worlds, plus so many new abilities and rules to follow, this is going to be the game to set the bar for Mario, and perhaps many games in general, for quite some time.

Follow @GameSinnersLive
How And Why Vanquish Does Everything As Advertised
The Best Deals From The Steam Summer Sale
We use cookies to ensure that we give you the best experience on our website. If you continue to use this site we will assume that you are happy with it.Ok