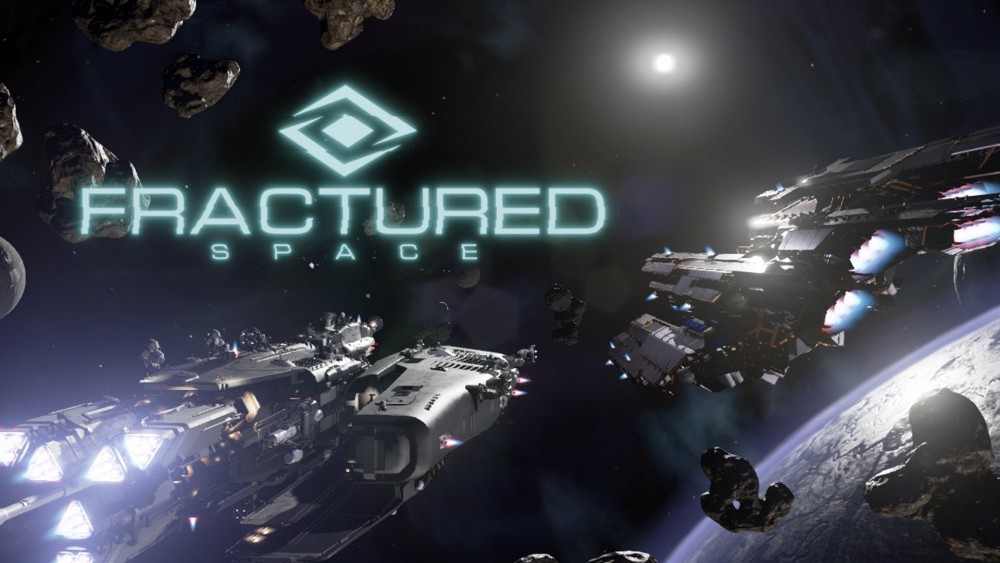 I have the nasty habit of buying all of my games post-release. It’s probably the cynic in me, quietly judging and mumbling ‘so you just spent sixty bucks on that new computer games when they could have gone for groceries? Good job.’ But with Fractured Space, I’m actually quite glad I shelled out the money for a pre-purchase, although today it’s moved into the free-to-play territory. Developed by Edge Case Games and released back in 2014, its a 5v5 tactical combat game with some emphasis on teamwork. But instead of some nerd with a bow or some lady with a foxes tail you’re in command of a interstellar battleship that’s 1,215 miles long with a crew of 5,335 brave souls armed with a front facing cannon capable of cracking large asteroids in half. This isn’t any little rinky-dink fighter, you’re in charge of a capital ship that makes The Enterprise from Star Trek look pathetic in comparison. You’re squaring off against five other ships, all equally armed and dangerous out for your blood. You pick the ship, build the crew, upgrade the weapons, and then duke it out on a battlefield powered by Unreal Engine 4. Isn’t that just the coolest?

Of course, it is still in development. Although after two years of being on Steam early access quite a bit has changed, you can see a massive list detailing it all and the year that the change has taken place. Everything from new game modes, ships, patches, it’s all been recorded in detail so that you can get a real sense of how things have changed over the years. And Edge Case Games is very dedicated to working with its community to improve on the product. For example, every Thursday evening at 19:00 and 21:00 UTC, you can head over to their twitch channel to watch the latest video on the games progress. Edge Case says that ‘we’re also on every social network you’d expect and are committed to involving you in the conversation and the decision process for the game, so if you have feedback we’re keen to hear it.’ So if Facebook and twitter aren’t enough for you then take a look at their Trello page where you can see how your suggestions are handled by the developers.

But how does the game play hold up? I will admit, it is far more fun with friends. I was finally able to sit down with a buddy of mine and play a 20 minute game over a Curse call and we had a blast together. But I feel that’s the same for any game, what I ask when I’m playing a game like Fractured Space is if I could play multiple games alone and still have a good time. I’m afraid though that despite the large number of points in its favor the fact that games can get repetitious, what with there being only one map to play on. This is of course very forgivable as I’d imagine that developing new maps was not as high up on the totem pole as fixing bugs or releasing new ship types, but after two years you would think that you would have more to show than two game modes, one of which just seems to be a copy of the first but with randomized ships instead of ones you’ve chosen.

Of course one of the things any developer will be thinking about is lasting power, will people be replaying the game a month, a year, two years from now? What can you do to make sure that the fans keep coming back? New characters (ships, in our case) which Edge Case has a good handle on but what about events, what about special in-universe updates to lore. I understand the crew are a part of the game’s lore in some way, but it just feels like there is a great deal of emptiness to it. Right now it’s pick your ship, fly back and forth from Gama, Alpha, and Beta and blow up the other guys. Don’t mistake me for a complainer, I understand that developing a good game takes precedent over developing a good story at the moment, but please give me something. Judging by the crew dialogue and portraits, we know there are sentient robots somewhere in the mix and that most of humanity seems to have made it to the space age (French, Russian, Israeli, etc. voices for characters) and it seems like you’ve got a lot of materials to work with. I just want some kind of little 200 word blog post saying ‘we might go this way, what do you think?’

I’ve noticed over the years how other things have changed. For example, crew members (which provide buffs and increased abilities to your ship) now cost a different kind of currency than they did in the past. For a game that’s so visually appealing and able to harness such a feeling of accomplishment when you destroy an enemy ship, I feel like some of the energy that Edge Case brings to the table could be directed towards other endeavors than the in game stores. But I’ll continue to play and support it because I firmly believe that once it leaves early access it is going to be an even better game than it is right now.

Hello. My name is Adam and I've been an avid producer of content on the internet since 2010. I have created my own website to help drive and fulfill my endeavors and quickly became very interested in the game journalism field. The majority of my articles will be very opinion driven however also contain much needed information through facts gathered from my resources. I'd like to take this opportunity to thank Mr. Salinas for bringing me on to the team and I hope that I will be able to contribute to anything that has possibly been missing on the site.

Follow @GameSinnersLive
A Spiritual Success(or): Old Concepts
3 Things I Want From The ‘Titanfall 2’ Campaign
We use cookies to ensure that we give you the best experience on our website. If you continue to use this site we will assume that you are happy with it.Ok