Age of Conan – Hyboria at your fingertips. 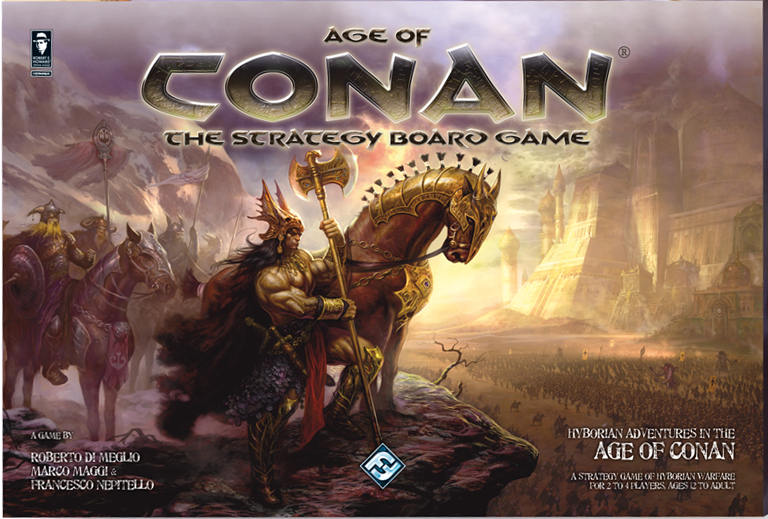 Age of Conan – Hyboria at your fingertips.

Out of the darkness of time immemorial, the light shed upon a long lost age. People talk about the dark ages, but there was never an age darker than the uchronic age of swords and sorcery. Between the glory days of Aryan Atlantis and the dawn of what we call antiquity, there was a savage and brutal world. A land filled with monsters, slavers, pirates, sorcerers and strange beings.  Dotting these lands were powerful kingdoms. Pillars that kept the world from descending into utter madness. In those times, affirming oneself was dangerous. Yet, a northerner boy  managed to sail the risky waters of life and become the mightiest and wisest king of the forgotten old. This is the Age of Conan.

Although this title is fairly old (2009), there has been a resurgence in interest. The Robert E. Howard IP has been lost with the the dissolution of the publisher Nexus a few years back. As I was eagerly awaiting for a rumoured expansion to Age of Conan, I was downright saddened to say the least. As it turned out however, the designers of Age of Conan (and War of the Ring for that matter) formed a new publishing house in 2015 and announced the reacquired rights for the base game and the long awaited expansion, Adventures in Hyboria.

This being the case, it is only fair to acquaint the unaware to this somewhat underrated gem.

Age of Conan is a strategy board game based on the swords and sorcery novels of Robert E. Howard. You and up to three of your friends will take the leading roles of Aquilonia, Turan, Stygia and Hyperborea. The goal is to get the most empire points by subduing…I mean ‘civilizing’ neighbouring provinces and attracting the wandering hero Conan to your cause.

The board is set up.

The board depicts the coasts and provinces of western and central Hyboria that readers of the books or players of the MMO game might be acquainted with. The four kingdoms are situated at fair distances from one another with a complement of five emissaries and four to five army units ready to begin their expansion. The colour coding is only used to mark the four regions. Although they look empty, these neutral provinces can defend themselves quite fiercely in some cases… well, in most cases actually.

The player turns consist of drafting custom six sided fate dice which depict different actions that the players can take. These are Military, Intrigue and Court actions. Military actions allow you to mobilize army units and attack adjacent provinces while Intrigue actions allow you to position emissaries and coerce provinces into joining your cause without bloodshed. These two methods yield wildly different results. Conquest will result in Empire points and a fort being built, whereas an alliance will construct a tower and generate gold coins, you get no points with the latter. However, gaining allies is faster and less costly than military campaigns as you might have suspected. The Court action is a support action that gives you Strategy and Kingdom cards and allows you to play powerful Kingdom cards with unconventional effects.

Okay okay, but where does Conan fit in?

A rightful question. Conan has its own figure that is moved around the board by a controlling player. Controlling Conan is highly beneficial as you may use him to conquer regions easily and instil unrest in rival provinces. Not controlling Conan will obviously leave you open to his mischief.

Conan is also tightly linked to the main structure of the game, which is divided into three ages, each consisting of four adventures that Conan wishes to embark on. At the beginning of an adventure, players make a bid to see who will control the barbarian. Bidding is done by playing a Strategy card and a numbered value token. These are all discarded afterwards. The bids are crucial moments where players need to make careful evaluation of whether controlling Conan is worth the loss of a powerful card and the accompanying bidding token.

Strategy cards are an important resource. They don’t come in abundance usually and serve multiple purposes. Besides bidding for Conan, they can also be used during military and intrigue contests to boost up success chances.

An adventure ready to begin.

Adventures come with a number of adventure tokens which are picked up one by one each time the Conan (controlling) player takes their turn. They can also be picked up by other players using the Court action. Once they are out, the adventure ends and a new bid is made. Conan can be temperamental so you can never be too sure on how long he will remain in your service. This is obviously influenced by the number of Court actions available in the fate pool as well as other players’ priorities.

At the end of the twelfth adventure the game ends. The game can also end earlier if during the third age one player attempts to crown Conan. Crowning Conan gives bonus points and also cause some point losses to your adversaries. Success is ensured by having the largest value of adventure tokens in one category. As these are kept face down, choosing which of the three (Women, Treasure and Monsters) to pick can be a gamble. Failing to crown Conan will result in your virtual death and elimination from the game. Brutal, isn’t it?

Obviously I have barely scratched the surface rule-wise but I’ll stop here. The rule set is generally easy to understand, although the original rule book has some small rule inconsistencies. The new printing from Ares Games will most likely fix them.

The board and components are some of the most impressive I have ever seen in a board game. The cards have full artwork (no borders), the tokens are very thick and easy to handle with rounded edges where required, and the miniatures…boy. They’re not as detailed as Citadel miniatures of course, but they are good looking models, cast in hard plastic, with no bending in sight.

The gameplay is fairly fast. Each action is resolved quickly, except when fighting campaigns which take around a minute or so depending on the amount of choices players have in combat. Activating characters or elite units, playing Instant cards or spending sorcerry tokens are all viable decisions that can be made before a combat round. Drafting Fate dice is fun and simplifies  a player’s choice pool without heavily limiting them. This system was pioneered in War of the Ring, and works even better in Age of Conan. It is safe to assume that each action is highly packed with risks and consequences. The strategy part is there, and players can formulate medium term plans regarding which areas to expand in and by what means. However, there is a general uncertain climate as the fate pool options are reduced with each action taken. This gears towards a more tactical game play.

As for Conan, he plays his part, yet when this game first came out, there were many criticisms about the lack of focus on this main character. To be fair, Age of Conan is about the Hyborian kingdoms, with Conan being an important pawn, but a pawn nonetheless.

The game is not without some flaws. There are objective cards which are designed to help players formulate their strategy during each age. However, they yield very few points overall and are generally regarded as just bonuses.
Also adventures can sometimes end too quickly and thus shorten the time span players originally thought they had at their disposal. Well, that’s generally not a such a bad thing, since long games are frowned upon these days anyway.
The last age is usually over in the first few turns as somebody quickly rushes to crown Conan (that’s usually me).

The bidding system is very swingy. Although the bidding tokens are the same for all players, the Strategy cards have a large value range, enough to keep bids fairly unpredictable.
Moreover, military and intrigue contests use dice. Although there are plenty of fixing from cards and sorcery tokens, dice can still screw you over. Sometimes you will be amazed of how many blanks you manage to roll, despite using your best Strategy card and having Conan on your side.

On the bright side, the randomness creates drama and a sense of struggle, which is precisely what is needed in this type of game. It is not exactly a war game nor an empire builder. It is difficult to categorize it, but that actually adds to its charm.

A close-up to the southernmost kingdom.

Age of Conan is a wonderful looking game with great components that uses a streamlined action selection system and features a plethora of tactical decisions. Although it sometimes falls prey to dice hate, preparing usually helps. Age of Conan plays well with two or three players, but the interaction really climbs at four. Fans of fantasy empires will dig it. As for fans of Conan the character; if the original idea of this game has disappointed you, most of the complaints have been addressed in the Adventures in Hyboria expansion. Conan evolves as a character and the adventures play a bit differently. But that is another tale…

ts. I am a tabletop game enthusiast. I have transitioned from video games since I discovered ones made of plastic, wood and cardboard. I'm now very picky with what video game I chose to play.

More in BOARD GAMES

Spoiler Season is Underway for Magic: The Gathering’s “Eldritch Moon”

Method and Motivation: Exploring the Human Element in Video and Tabletop Games

Merchants and Marauders – A guide to plundering

Follow @GameSinnersLive
Battleborn: Early Access for Alani
This War of Mine: The Board Game hot on KS!
We use cookies to ensure that we give you the best experience on our website. If you continue to use this site we will assume that you are happy with it.Ok