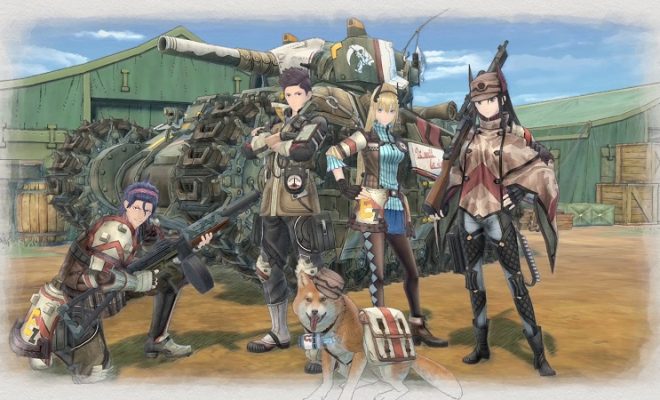 The Valkyria Chronicles series returns with Valkyria Chronicles 4 on PS4, Xbox One, Switch and PC, bringing back the strategy RPG gameplay that fans know and love. The Entertainment Software Rating Board (ESRB) has revealed their rating for the game, along with the usual in-depth description that breaks the rating down.

Unsurprisingly, the game received a T (for teen) rating, which was due to Blood, Language, Suggestive Themes, Use of Alcohol and Tobacco, and Violence. The following is the complete rating description from esrb.com:

“This is a strategy role-playing game in which players control a squad of soldiers in a fictional World War II-inspired conflict. Battles are mostly depicted from a third-person perspective as characters perform various actions such as claiming strategic positions, moving tanks, and firing weapons (e.g., machine guns, sniper rifles, flamethrowers). Cutscenes sometimes depict characters getting shot and killed; these sequences are highlighted by cries of pain and realistic gunfire. Some scenes depict soldiers with bloodied bandages/wounds, as well as brief splashes of blood when injured. The game contains some suggestive material: a man grabbing a woman’s buttocks; a character staring at a female, saying, “Check out the a*s on that one! I’d swab her deck”; dialogue such as “Who else would try to sneak into a strip club at ten years old?” During the course of the game, characters often discuss alcohol, and one character is shown drunk (e.g., “And I’m sssuper sober, so don’t worry it’s fiiine… hic!”); another character is seen holding a cigarette and asking for a light. The words “sh*t” and “a*shole” appear in dialogue.”

Follow @GameSinnersLive
Marvel’s Spider-Man: The Art Of The Game Book Out Now
DualShock 4 Fortnite Bonus Content Edition Out Now
We use cookies to ensure that we give you the best experience on our website. If you continue to use this site we will assume that you are happy with it.Ok