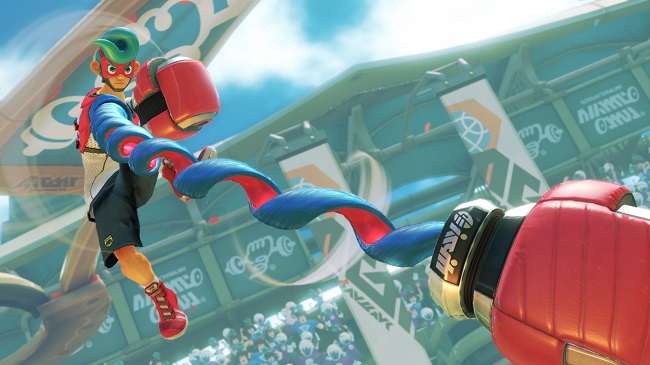 The Nintendo Switch has already had some great games release for it, with things kicking off with The Legend of Zelda: Breath of the Wild and then continuing with Mario Kart 8 Deluxe. While there are plenty of established IPs that will launch for the console later this year, the one that has everyone the most curious is the new IP called ARMS.

While we won’t have a clear idea of what the overall consensus on the game is until it launches, things are starting out with a positive note with its first review. The first review comes from the Japanese gaming publication called Famitsu, which gave the game a score of 33/40. For those who are unfamiliar with the publication or how it scores games, it essentially has four separate people play and review the game and then score it out of 10. That is why the score is out of 40, and in the case of ARMS the four reviewers scored the game 8, 8, 8 and 9.

It was also revealed that this was the highest-reviewed game of the newest issue of the magazine, with the game edging out The Sexy Brutale’s 32/40 and World of Goo’s 32/40. A score of 33/40 certainly isn’t an incredible score to get, but it at least seems to confirm that the game is solid and will not end up being a gimmicky flop. The game relies entirely on the motion controls to play, so it was very possible for that to be a major flaw that dragged down the experience substantially. However, the response to the controls has been very positive from preview events.

ARMS will launch exclusively for the Switch on June 16th. The game is expected to be getting additional content via post-launch updates, which will include the likes of new characters, stages and arms. This free content release strategy mirrors that of the one used by Nintendo with Splatoon, which is smart considering that one turned out so well.