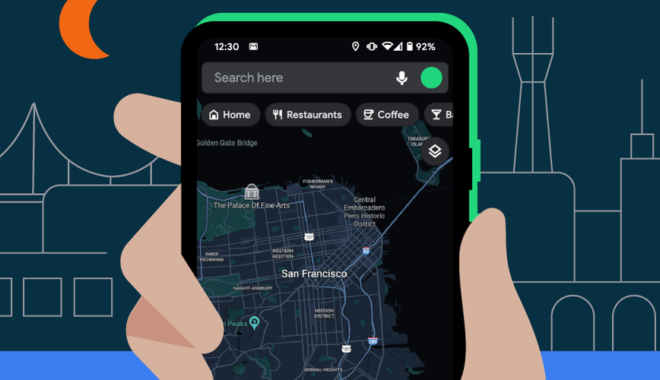 This is from an earlier rollout, but Google Maps’ dark mode should look something like this.

Google Maps has finally decided to support dark mode on Android 539 days after officially launching Android 10. Google’s latest blog post says that dark mode in Google Maps is “soon expanding to all Android users globally,” making the feature official after lots of public experiments.
Google’s uneven rollout strategy makes it hard to nail down when any feature officially “launches.” Some users have had dark mode for a while, though, through various experiments and early rollouts. Google has been teasing a dark mode for Google Maps since October 2019, and experimental rollouts hit some users in September 2020. Google Maps has also been showing a dark-colored map in navigation mode for some time, but that’s not the same thing as a comprehensive dark mode for all the UI elements.
If Google Maps is following Android’s best practices, the UI should automatically switch over to the dark theme if your system settings have dark mode enabled. Google says you’ll also be able to find a new “theme” section in the Google Maps settings, where you can toggle the feature manually. The Google Maps dark mode that has been floating around for a while has been on a server-side switch. The code is already on your device, so there’s no version we can point to that will enable dark mode; you just have to wait for Google to flag your account.
With Google Maps finally on the dark mode train, that should cover all of Google’s major apps. The Play Store, Gmail, Google Assistant, Chrome, Calendar, Drive, Photos, and YouTube all support dark mode.

Follow @GameSinnersLive
2021 Buick Envision is better in all the right ways
iOS 14.5 is coming soon. Here’s what we know about a release date and new features
We use cookies to ensure that we give you the best experience on our website. If you continue to use this site we will assume that you are happy with it.Ok