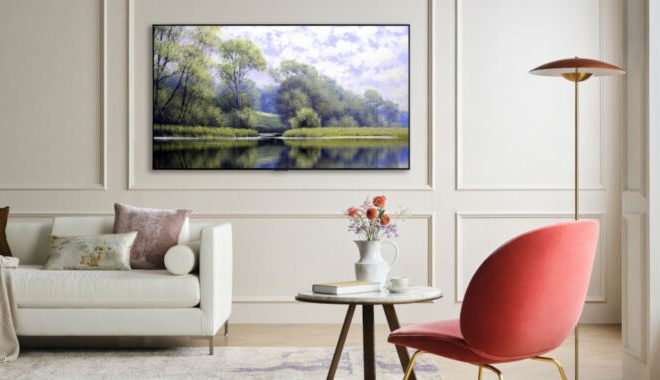 This is the new G1 model.

Some of LG’s new TVs come with this “gallery stand” option.

You can wall-mount them, too, of course.

Here are the “QNED” TVs.

The more modestly priced NanoCell product line is still a thing, too.

LG has announced that it will begin licensing its webOS TV software for use by other TV manufacturers. That will put webOS in direct competition with other platforms in use across TV brands, such as alternatives from Roku, Amazon, and Google.
LG says “over 20 TV manufacturers” have “committed to the webOS partnership” and names RCA, Ayonz, and Konka as examples. They’ll ship the OS in their TVs and, in so doing, gain access to voice-control features, LG’s AI algorithms, and a fairly robust library of already built streaming apps like Netflix, YouTube, or Disney+.
For smaller manufacturers, this is more cost-effective than developing these features on their own or lobbying companies like Netflix or Disney to support new platforms.
At the annual Consumer Electronics Show this January, LG announced webOS 6, a major revamp of the interface that adopts a design language that more closely resembles what’s found in most other TV operating systems. However, licensees of webOS will at least for now be limited to an earlier version of webOS, which has the old interface.
In addition to any licensing fees, LG will be able to leverage this larger install base to profit from a more robust advertising network and from larger-scale user data collection. The company will also put its LG Channels content operation on more TVs. Further, LG has bigger ambitions for webOS than just TVs, so this move aids the company’s efforts to make webOS more ubiquitous as the software expands into cars, home appliances, and other products.
Advertisement

Users may balk at the advertising and data collection, but there is one upside for them: a larger install base for webOS will likely lead to more frequently updated, higher-quality apps from content companies.
As is the custom, this announcement came with a published statement from a prominent executive at the company—in this case, LG Home Entertainment President Park Hyoung-sei, who said:
The webOS platform is one of the easiest and most convenient way to access millions of hours of movies and TV shows… By welcoming other manufacturers to join the webOS TV ecosystem, we are embarking on a new path that allows many new TV owners to experience the same great UX and features that are available on LG TVs. We look forward to bringing these new customers into the incredible world of webOS TV.
webOS for TVs as we currently know it dates back to 2014, and reviewers and users have admittedly responded well to it because it’s one of the nicer-to-use TV operating systems. Part of its ease of use stems from the Wii remote-like magic remote that comes with LG TVs; LG’s press release says that partners who license webOS will ship TVs with similar remotes.
LG previously released an open source version of webOS in 2018, and Samsung announced plans to make its Tizen TV OS available for licensing by other TV manufacturers back in 2019. But a year and a half later, we haven’t heard anything more concrete about the latter.

Follow @GameSinnersLive
Apple’s Tim Cook pays tribute to the late Steve Jobs
Disney Plus: Everything to know about Disney’s streaming app
We use cookies to ensure that we give you the best experience on our website. If you continue to use this site we will assume that you are happy with it.Ok