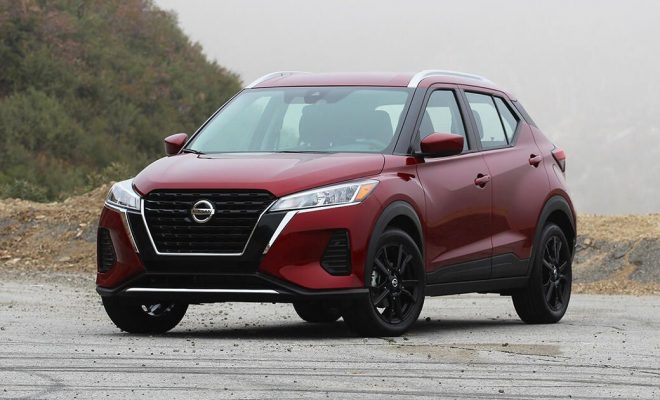 The 2021 Kicks looks sharper than its predecessor.
Steven Ewing/Roadshow
As far as affordable small cars go, you could definitely do worse than the Nissan Kicks. It’s an efficient, feature-rich little thing, and for new car shoppers on a budget, the Kicks is one of the best overall values available today.

The Kicks gets a much-needed glow-up for 2021, with styling that’s way less frumpy than before. It’s a good look, and while I personally prefer the more extroverted designs of competitors like the Kia Soul or Hyundai Venue, I think the Kicks is altogether more refined than the wacky Hyundai Kona or Toyota C-HR. You get 16-inch wheels on the base Kicks S, but SV and SR trims upgrade to larger 17s. My SV test car has the optional black-painted alloys, which cost $495 and would probably look better alongside one of the available two-tone paint schemes — one with a black roof, for example.The Kicks’ interior plays it down the middle with a no-nonsense design. The controls are exactly where you expect them to be and none of the buttons or stalks feel flimsy. Sure, the doors are lined with hard plastic and the piano black trim around the gear shifter will never, ever look clean, but the stuff you’ll touch most often — the steering wheel, window switches, infotainment controls, etc. — are all nice. I do wish the cup holders weren’t one big rectangle with a partition in the middle, though. Smaller drinks like, oh, I don’t know, a grande vanilla nonfat latte from Starbucks can easily tip over while making a turn. Ask me how I know.

Nissan’s awesome Zero Gravity seats aren’t available in the Kicks, but the cloth chairs in my SV tester are nevertheless comfortable, and they even have an interesting diamond pattern for a little visual flair. You sit high up in the Kicks, too, and the seating position is nice and comfortable for a 5-foot, 8-inch average dude like myself. Plus, this higher seat height gives you a nice, commanding view out the front and side windows — and it’s better for your posture, too.The back seats are serviceable, but better suited to smaller adults or children, and there’s enough room behind them to schlep a couple of carry-on bags or a shopping cart’s worth of groceries. The Kicks offers 25.3 cubic feet of space with the rear seats upright, which bests the Ford EcoSport, Hyundai Kona and Kia Soul. However, fold the bench flat and you only get 32.3 cubic feet, which is almost half the max capacity of the Soul and worse than the aforementioned Ford and Hyundai. If you need to haul on the regular, the Kicks might not be for you. But since most people will use the hatch without folding the back bench, I’m glad Nissan chose to err on the side of seat-up spaciousness.

The interior looks plain, but it’s quiet and the seats are comfortable.
Steven Ewing/Roadshow
Every Kicks uses the NissanConnect multimedia system, with both Apple CarPlay and Android Auto standard. The base Kicks S has a 7-inch touchscreen but the SV and SR use a slightly larger, 8-inch head unit; these upper trims get an additional 7-inch display inside the gauge cluster, too. NissanConnect’s graphics are dated and the menu structure is kind of weird, but it’s easy enough to plug your phone into one of the USB ports and let the Apple or Android software do the heavy lifting. SV and SR trims come with both USB-A and USB-C outlets, by the way.

A huge selling point for the 2021 Kicks is the sheer amount of standard driver-assistance tech. Automatic emergency braking (front and rear), blind-spot monitoring, lane-departure warning, parking sensors and rear cross-traffic alert are standard across the board, even on the base, $20,000 model, and SV and SR trims add adaptive cruise control. No, you can’t get Nissan’s cool ProPilot Assist highway driving assistant, but that’s not a total deal-breaker. You can, however, get a 360-degree camera on this little guy, though it’s only available on the top-level SR.There isn’t much to get excited about under the hood, but the Kicks’ powertrain is nevertheless adequate and efficient. The 1.6-liter naturally aspirated four-cylinder engine produces 122 horsepower and 114 pound-feet of torque, which sound pretty dismal on paper, but on the road, it’s totally fine. Remember, the Kicks only weighs 2,744 pounds in its heaviest spec, so that engine doesn’t have a ton of car to lug around. The Kicks only comes with front-wheel drive, however, so if you’re looking for a tiny CUV with AWD capabilities, try the Honda HR-V or Mazda CX-3.SV and SR models get an 8-inch touchscreen with Apple CarPlay and Android Auto.
Steven Ewing/Roadshow
You can only get the Kicks with a continuously variable transmission. And before you balk at the idea of CVT, don’t forget that Nissan’s been offering this transmission type for years, meaning the company’s had a lot of time to fine-tune its so-called Xtronic setup. Seriously, the Kicks has one of the best CVTs around, quietly operating in the background without the high-revving drone that people tend to associate with these transmissions.Plus, that CVT helps the Kicks return bangin’ fuel economy. Official EPA ratings aren’t available just yet, but Nissan estimates you’ll see 31 miles per gallon in the city, 36 mpg highway and 33 mpg combined — numbers right in line with what I saw in the real world. That makes the Kicks more efficient than a lot of other small crossovers, beating the Ford EcoSport, Hyundai Venue, Kia Soul and more.The Kicks handles daily driving duties admirably, and it’s actually pretty fun to drive. The suspension is nicely tuned for both city and highway driving and the brakes are strong with solid pedal feel. The steering is light, just like every other small crossover, but it quickly responds to inputs, and more importantly, the Kicks is easy to maneuver and park. No one is expecting the Kicks to be a thrill, but it’s a perfectly pleasant little runabout. Yeah, it’s pokey, but it might surprise you on a winding road.These black-painted 17-inch wheels are a $495 option.
Steven Ewing/Roadshow
You can get into a Kicks for as little as $20,595, including $1,095 for destination. The midgrade SV adds a lot of the niceties you’ll actually want, and it starts at a still-affordable $22,395. The loaded SR comes in at $23,035, and its only big-ticket option is the $1,200 Premium Package, which brings the price to $24,235 delivered.The SV grade should make up the bulk of Kicks sales, but I actually think a loaded SR is the best value. The SR gets you all the best driver-assistance tech and it also comes standard with LED headlights (and foglights). That last bit is especially important — the halogen lamps on my SV test car are so dull that, at one point, I actually pulled over to make sure I had the low-beams on and wasn’t just relying on the running lights (like so many other oblivious Los Angeles drivers). LED headlights are brighter and therefore safer. Why they aren’t standard on every car at this point is kind of beyond me.It’s hard to beat the Kicks’ overall value.
Steven Ewing/Roadshow
But the loaded SR’s virtues extend beyond illumination. Add the Premium Package and you get heated seats, a heated steering wheel and that premium Bose audio system you’ve probably heard — you know, the one with speakers in the driver’s headrest. Nothing makes an inexpensive car feel premium quite like heated seats and a kickin’ (get it?) stereo. All that and more for less than $25K? I know it’s not always easy to swing a couple thousand extra when you’re on a tight budget, but you’ll also be hard pressed to find this many amenities for this little cash.The Kicks plays in a super-crowded class, alongside everything from the dumpy Chevrolet Trax to the dumpier Ford EcoSport to attractive and compelling hatchbacks from Korea like the Hyundai Kona, Venue and Kia Soul. Personally, I’d probably go with the Soul if it were my money; the Kia has a better interior and it’s nicer to drive, as well. Even so, the Nissan still offers more features, and it’s more efficient than anything else in its segment. Any way you slice it, the Kicks offers great value and it’s hard to argue with that.

Follow @GameSinnersLive
10 tips and tricks everyone with a Mac needs to know right now
The best 15-inch gaming and work laptop for 2021
We use cookies to ensure that we give you the best experience on our website. If you continue to use this site we will assume that you are happy with it.Ok