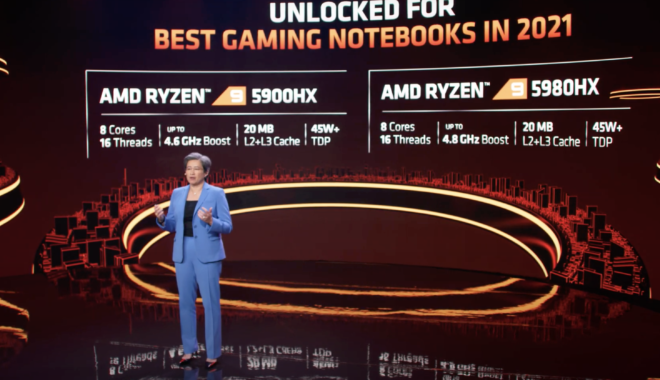 As expected, AMD took to the CES stage this week to announce new laptop CPUs. Most of the new Ryzen 5000 mobile family of chips share similarities with the desktop CPUs the company announced a few months ago, and they’ll start shipping with laptops from some of the bigger computer-makers in February.
The new chips are divided into two sub-families, both at least in part based on 7nm Zen 3 tech: there’s the H-series, which is meant for high-end, performance-oriented gaming and content creation notebooks, and the U-series, which takes aim at Intel’s dominance in the ultraportable space with a greater focus on power efficiency.
The lineup’s biggest lifters are the Ryzen 9 5980HX and 5980HS. The former is a gaming-oriented chip that will be unlocked for overclocking in some machines. The latter, meanwhile, is tuned more for laptops made for creatives. Both of these (and all but two of the chips in the Ryzen 5000 mobile family) sport eight CPU cores and 16 threads at up to 4.8Hz.
Advertisement

Here’s a chart including specs for all the chips announced, from AMD’s website:
Enlarge / The AMD Ryzen 5000 mobile lineup.The U-series lineup also includes 8-core chips, but as you can see, a couple 6-core ones are in there, too. While AMD has been making rival Intel’s life difficult in performance-oriented machines of late, Intel still dominates the ultraportable space (for now), so AMD is surely hoping to achieve some growth there. To that point, AMD claims that the 5800U can deliver almost 18 hours of battery life for normal use cases and up to 21 for video playback. (Intel announced its own laptop chips this week, too.)
On the gaming side, AMD says the 5900HX beats Intel’s Core i9-10980HK by more than 20 percent in 3DMark, which certainly seems plausible given what we saw on the desktop side—though it would of course be wise to wait and see benchmarks from someone other than AMD.
OEMs have already started announcing laptops with these chips, so we expect to see those illuminating benchmarks as early as next month.

Follow @GameSinnersLive
Galaxy S21, S21 Plus and S21 Ultra are here with new design and $200 cheaper price
Google says it’s closing the Fitbit acquisition—uh, without DOJ approval?
We use cookies to ensure that we give you the best experience on our website. If you continue to use this site we will assume that you are happy with it.Ok