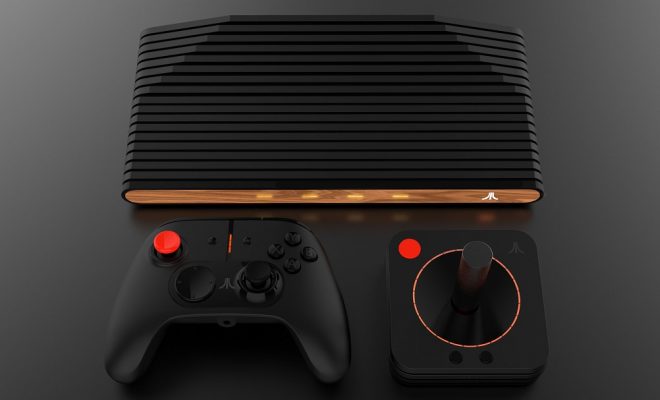 Atari officially unveiled their new console at the Game Developers Conference today, revealing the name as Atari VCS. We’ve known for quite a while now that the company has been working on a new console and are planning to break back into the console wars, with the console originally having a placeholder name of Ataribox.

The VCS in the new console’s name stands for Video Computer System, which certainly gives the whole thing a very nostalgic vibe that they’re going for. The console will come with two controllers, with one of them being a retro joystick and the other being a modern controller. A release date and price haven’t been revealed yet, but the company did reveal that everyone can expect pre-orders to open sometime next month.

For those wondering if this is simply going to be a retro machine pre-loaded with old games similar to the Super NES Classic, there’s going to be more to it than that. While it will include lots of retro games, it will also be a “completely new connected device designed for today’s living room.” It will also “change the way you interact with your TV, just as the original Atari 2600 Video Computer System first did more than 40 years ago.”

“Every person at Atari and every partner involved with the new platform is just as fanatical about the brand and its heritage as our biggest fans are. With the Atari VCS name, we know how important it is to get everything completely right and that’s why we briefly paused an imminent launch late last year. It was a difficult decision with the countdown underway, but we weren’t willing to go forward with even one thing out of alignment. We hope that Atari’s fans appreciate our extreme attention to detail and are as excited about the Atari VCS as we are.”

Much more information on the Atari VCS will be coming soon, so be sure to stay tuned for that.

Follow @GameSinnersLive
Soul Calibur 6 PS4 / Xbox One Box Art Revealed
Hyper Light Drifter Switch Release Date Set For Summer
We use cookies to ensure that we give you the best experience on our website. If you continue to use this site we will assume that you are happy with it.Ok