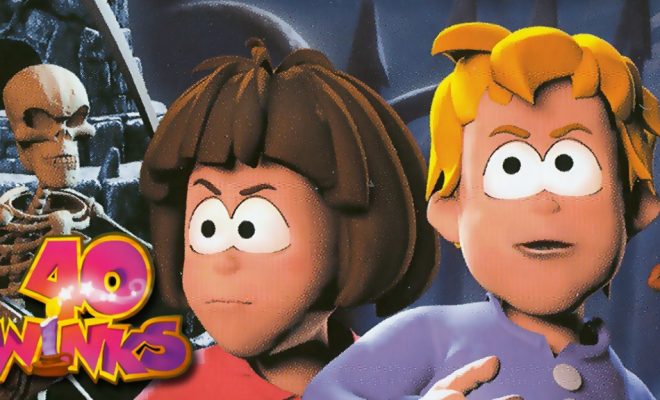 40 Winks may not be one of the most well-known games of the PS One era, but it nevertheless is a beloved platformer that brings back good memories for lots of gamers. That game was originally set to also release for Nintendo 64 before being canceled, and now nearly 20 years later that will finally happen.

Development team Piko Interactive launched a Kickstarter campaign in order to get the previously-canceled N64 version of 40 Winks off the ground, asking for $20,000 to make it happen. The campaign has already been a rousing success, raising close to $100,000 now with 19 days to go. This means that the game will receive both a standard and special edition release on Nintendo 64.

This will be the very first N64 game released following the console’s discontinuation, with there not being any other homebrew, indie, or unreleased games produced officially since then. The developer said that “Considering this is the first new N64 game, we have come to Kickstarter to judge the demand for a new Nintendo 64 game cartridge and to fund the production run for this new platform we plan to support with new games.”

While the N64 version of 40 Winks does not currently have a release date, it is expected to launch at some point later this year. It launched for the original PlayStation back in November 1999. The following is an overview of the game and its key features:

“40 Winks is an action platformer where you control brother and sister, Ruff and Tumble. Your goal is to collect 40 Winks scattered around the world to stop an evil man called Nitekap. Nitekap wants to turn the winks into hood-winks who are responsible for giving children nightmares.”

Follow @GameSinnersLive
Bloodborne Comic Collection Price, Release Date And Cover Revealed
Moss PS4 File Download Size Revealed
We use cookies to ensure that we give you the best experience on our website. If you continue to use this site we will assume that you are happy with it.Ok