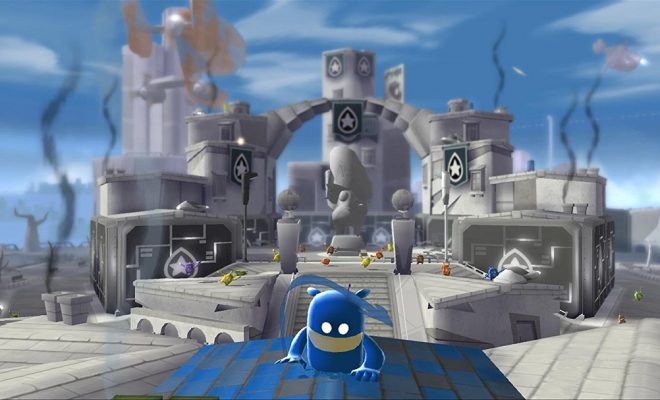 THQ Nordic has announced that the platform-puzzle game called de Blob is making its way to yet another new platform, with the game currently in development for Switch. The company announced that the game’s release date is set for 2018, though they didn’t share the specifics on the release just yet.

The following is a complete overview of the game for those who are unfamiliar with it:

The evil I.N.K.T. Corporation has declared ‘Color is a Crime!’ and leeched Chroma City of all its beauty and interest. The race to rescue Chroma City has just begun, and only de Blob can save the world from a black-and-white future with his unique abilities to color the world back to life.

de Blob originally debuted nearly 10 years ago in 2008, with the game originally launching on iOS that year before coming to Wii shortly after that. The game finally made its way to PC, PlayStation 4 and Xbox One last year, bringing the game to a whole new audience. The Switch seems like it will be a great new platform for the game to appear on, allowing gamers to play it both at home and on the road. We’ll be sure to bring your more information on the Switch port as soon as it becomes available.

Follow @GameSinnersLive
Street Fighter 5 Adding Blanka To Roster Later This Month
Mulaka Coming Later This Month To PS4 & PC, Early Next Month To Switch & Xbox One
We use cookies to ensure that we give you the best experience on our website. If you continue to use this site we will assume that you are happy with it.Ok