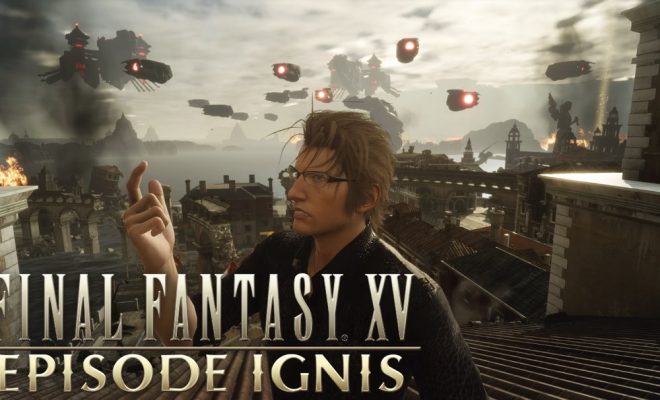 This week marks the release of Final Fantasy 15’s Episode Ignis DLC, which serves as being the final story DLC centered around one of the four main protagonists. Now Square Enix has released a new trailer for the DLC, which introduces everyone to the game’s battle commands. You can check it out at the bottom of this post.

The following is an overview of the Episode Ignis DLC:

“Experience an emotional and breath-taking episode as you take control of the ever-dependable Ignis. Unbeknownst to Noctis as he remains unconscious after the Trial of Leviathan, Ignis faces his own fight on the streets of Altissia, driven by his unwavering dedication to protect Noctis at all costs. Overwhelm opponents with tactical mastery as Ignis struggles to save the city, his comrades and himself from ruin. FINAL FANTASY XV: EPISODE IGNIS will be available for individual purchase or included at no additional cost for Season Pass owners.”

Episode Ignis will be the final piece of content that Final Fantasy 15 will be receiving in 2017, but there’s much more in store for the game in 2018. The game will be getting even more story DLCs for fans to check out, with one of them delving into the backstory of antagonist Ardyn. However, perhaps the biggest event will be the highly-anticipated release of the game’s PC version, which will be coming early next year via the Windows Edition.

Final Fantasy 15 is available for PlayStation 4 and Xbox One. Be sure to check out the trailer showing off battle commands for the Episode Ignis DLC below.

Follow @GameSinnersLive
Review: The Surge: A Walk In The Park Offers A Colorful (And Freaky) Amusement Park To Visit
Okami HD PS4 File Download Size Revealed
We use cookies to ensure that we give you the best experience on our website. If you continue to use this site we will assume that you are happy with it.Ok