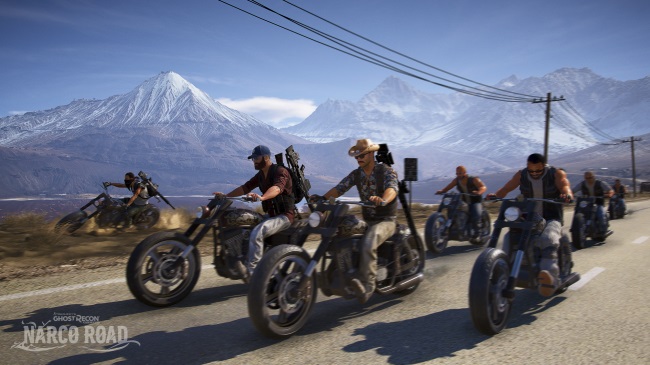 Ubisoft’s Ghost Recon: Wildlands has been one of the biggest game releases of 2017 so far, taking the formerly linear tactical series and throwing it into an open world setting that has been a hit. While the game certainly wasn’t lacking any content for fans to dive into at launch, today we learn that more content will be coming to the game later this month.

The developer has announced that the game’s first expansion will be called Narco Road, which will launch on April 18th across all supported platforms. As for what the expansion is all about, it has the player trying to track down three gangs of smugglers that are all led by a ringleader named El Invisible. This new DLC will include over 15 new missions, along with side missions that offer new gameplay such as racing challenges.

The three ringleaders are Eddie Escovado, Arturo Rey and Tonio Mateos. Escovado is a self-proclaimed social media star and adrenaline-addicted leader who leads the Kamikazes gang. Rey is the mysterious leader of the Death Riders, which is a gang that worships Santa Muerte. Finally, Mateos is the arrogant leader of the Jinetes Locos, a gang that specializes in muscle car racing. The object of the DLC is to try and gain fame and followers in the region to get in with these 3 gang leaders, which will ultimately lead to El Invisible.

There’s more that will be coming to the game thanks to this expansion outside of new missions, as there will also be new weapons, outfits, and vehicle types for players to check out. The developer also shed some light on what some of the new vehicles will be, which includes the likes of monster trucks, muscle cars, powerful motorcycles and nimble planes.

Ghost Recon: Wildland’s Narco Road expansion will launch for PlayStation 4, Xbox One and PC on April 18th for season pass owners. However, those who would prefer to purchase it on its own will have to wait until April 25th, with the DLC itself costing $14.99.

Follow @GameSinnersLive
Call Of Duty: Black Ops 2 Finally Joins Xbox One Backwards Compatibility
Mario Kart 8 Deluxe File Size Confirmed For Nintendo Switch
We use cookies to ensure that we give you the best experience on our website. If you continue to use this site we will assume that you are happy with it.Ok