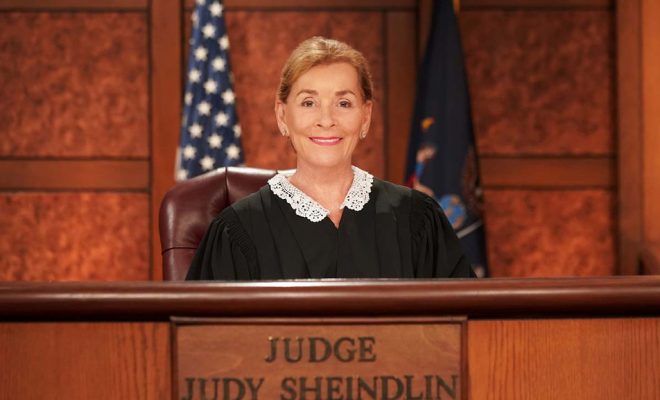 Judy Sheindlin has 30 days to amend her suit against Richard Lawrence, who she claims isn’t entitled to the fees he’s collected for packaging the series.

The legal fights over Judge Judy Sheindlin’s lucrative eponymous courtroom show are beginning to put the drama shown on the long-running series to shame, and the latest decision is a blow to the famous jurist.
Sheindlin in August sued Richard Lawrence — who had previously sued and settled with CBS’ Big Ticket Entertainment in a dispute over series profits and then again sued the company, and the judge personally, over library sale profits — calling him “an unethical and self-dealing talent agent, and one of the luckiest men in the world.”
Lawrence’s Rebel Entertainment Partners is successor-in-interest to the agency  that originally packaged Judge Judy (Abrams Rubaloff & Lawrence). Sheindlin argues he didn’t really package the series because he didn’t represent her in the deal and therefore isn’t entitled to the $22 million in fees he’s collected from the show. He repped the two non-writing producers, Kaye Switzer and Sandi Spreckman, who originally suggested Sheindlin consider a TV career. (Switzer and Spreckman are also suing Big Ticket and Sheindlin’s complaint says the women had sued Lawrence and they quietly settled.)

The agent filed a demurrer to the complaint arguing, among other things, that Sheindlin lacked standing to challenge the validity of a contract to which she wasn’t a party and that her suit is well outside the statute of limitations.
L.A. County Superior Court judge Richard J. Burdge Jr. on Wednesday sustained the demurrer with leave to amend, finding that because Sheindlin wasn’t a party to or a third-party beneficiary of the agreement between ARL and Big Ticket she lacked standing to seek a declaration that the contract is wrongful.
Burdge, in a tentative ruling that was later adopted as final, also found Sheindlin’s causes of action for unfair competition and unjust enrichment aren’t sufficiently pled. She has 30 days to file an amended complaint.
Lawrence’s attorneys, Bryan Freedman and Sean Hardy, sent The Hollywood Reporter a statement Wednesday in response to the decision. “This lawsuit has absolutely no legal merit and the court stated as much today,” said Freedman. “The court should not be used solely as a vehicle for people to disparage others. We are pleased the court saw this matter for what it truly is: a pack of lies, with no legal significance that amounts to nothing more than a waste of judicial resources.”
Sheindlin’s attorneys, Todd Eagan and Marty Singer, also sent THR a statement on Wednesday. “This is simply a procedural issue with the Court to clarify our claims by allowing us to file an amended Complaint,” said Eagan. “The Court declined to dismiss the claims, and in making its ruling today the Court assumed that all of the facts pled in the Complaint are true — and they are true. It is not disputed that Richard Lawrence received over $20 Million in packaging fees even though he did not represent a package and has caused significant damage to Judy Sheindlin by his wrongful conduct. In fact, the WGA itself has confirmed that packaging fees are unlawful and has sought repayment of illegal profits.”

Follow @GameSinnersLive
Netflix to Spend Nearly $500 Million on Korean Content This Year
Live-Action ‘Dora,’ ‘Fairly OddParents’ in the Works at Paramount+
We use cookies to ensure that we give you the best experience on our website. If you continue to use this site we will assume that you are happy with it.Ok