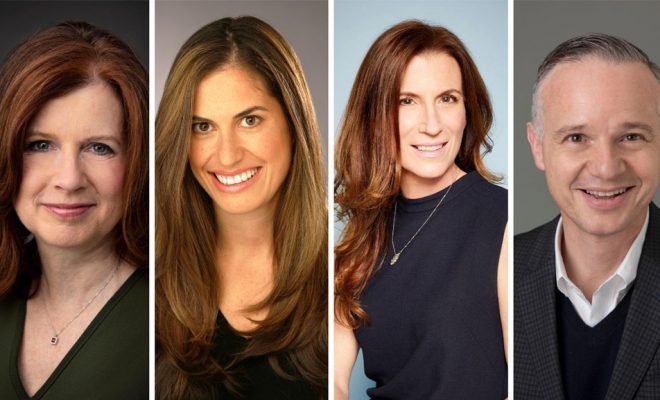 Janet Graham Borba and Susanna Felleman will take on expanded roles at HBO and HBO Max, while long-serving execs Sandra Dewey and Pat Kelly are departing.

HBO and HBO Max will combine their production and business affairs units in the latest streamlining at WarnerMedia.
Janet Graham Borba has been elevated to executive vp production for HBO and HBO Max after serving as head of HBO’s production department for the past four-plus years. Susanna Felleman, meanwhile, will be executive vp business affairs for the premium cabler and SVOD platform. She was previously head of business affairs for HBO. Both will report to Glenn Whitehead, president business affairs and production for HBO and HBO Max.
Sandra Dewey, president business operations and production for HBO Max, TBS, TNT and TruTV, Pat Kelly, currently executive vp business affairs, are departing the company. Kelly will remain for a time to assist with the transition.
“As HBO Max moves toward the same in-house production model that’s been the heart of the HBO programming lineup for the past many years, it’s become clear that we need greater consistency across the business and production practices of HBO and HBO Max,” said Whitehead. “I’ve worked with Janet and Susanna for many years and know that they’ll be brilliant at leading these combined teams as we continue to program HBO and HBO Max with premier original content and harness the combined mastery of these production and business affairs teams to build out the HBO Max streaming service.”
Of Dewey and Kelly’s departures, Whitehead said, “Sandra and Pat have both made invaluable contributions to the company throughout their tenures, and we owe them a huge debt of gratitude. They’re outstanding colleagues, and we wish them all the best in their future endeavors.”
Graham Borba has been with HBO’s production department for some 25 years and has overseen some of the cabler’s biggest productions, including Game of Thrones. She became head of the department in 2016 and oversees physical production, post and production operations.
Felleman has worked in HBO’s business affairs unit for 15 years and has headed the division since 2016. She previously worked in the network’s legal department.
The ongoing restructuring at WarnerMedia has featured a number of high-profile executive changes — including HBO topper Casey Bloys also becoming head of HBO Max — and resulted in layoffs companywide, with about 5 percent to 7 percent of the company’s employees (up to 1,750 people) set to be let go.

Follow @GameSinnersLive
Marvel’s Kevin Feige Talks ‘WandaVision’ Future, Netflix’s Heroes and R-Ratings
ViacomCBS Exec on Keys to Paramount+ Launch, Global Success: “We Have Got a Really Strong Brand”
We use cookies to ensure that we give you the best experience on our website. If you continue to use this site we will assume that you are happy with it.Ok