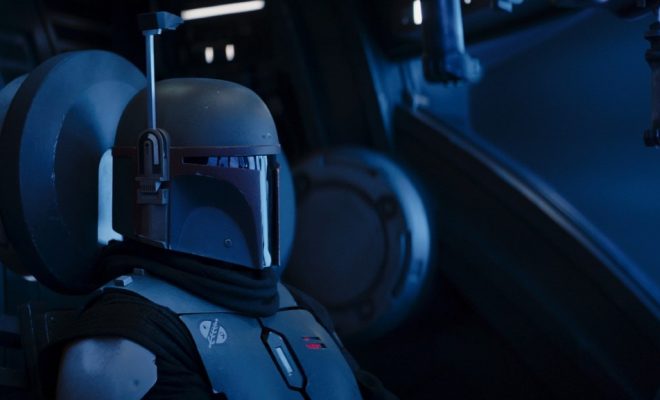 The ‘Star Wars’ series leads the rankings for the week of its second-season finale.

The Mandalorian closed out its second season on Disney+ by ascending to the top of Nielsen’s streaming rankings.
The Star Wars series became the first program on a streaming platform other than Netflix to claim the top spot (the rankings currently measure Amazon’s Prime Video and Hulu in addition to Disney+ and Netflix). It drew 1.34 billion minutes of viewing time in the week of Dec. 14-20, its highest weekly total to date. The Mandalorian’s eighth consecutive week in the top 10 also extends the show’s record for longest run in the rankings.
The Mandalorian edged The Office (1.31 billion minutes of viewing) for the No. 1 spot a week after coming in second to the former NBC comedy. The Crown (772 million minutes) finished third, spending its sixth straight week in the top 10.
The only new entry to the Nielsen rankings was Netflix’s movie A California Christmas. It finished 10th with 581 million minutes of viewing time.
Streaming platforms contend Nielsen’s methodology doesn’t capture the full scope of viewing on devices other than TV sets. Nielsen also only measures U.S. audiences, not those in other countries.
Nielsen’s top 10 streaming programs for Dec. 14-20 are below, with the prior week’s rank in parentheses. Original streaming series and films are marked with an asterisk.
1 (2). The Mandalorian* (Disney+), 1.34 billion minutes viewed
2 (1). The Office (Netflix), 1.31 billion
3 (4). The Crown* (Netflix), 772 million
4 (7). Grey’s Anatomy (Netflix), 762 million
5 (5). Manhunt: Deadly Games (Netflix), 712 million
6 (6). Supernatural (Netflix), 684 million
7 (3). Virgin River* (Netflix), 681 million
8 (8). Criminal Minds (Netflix), 651 million
9 (10). Schitt’s Creek (Netflix), 597 million
10 (nr). A California Christmas (Netflix), 581 million

Follow @GameSinnersLive
Impeachment, ‘Chicago Med’: TV Ratings Wednesday, Jan. 13, 2021
Former ‘Saved by the Bell’ Star Dustin Diamond Diagnosed With Cancer
We use cookies to ensure that we give you the best experience on our website. If you continue to use this site we will assume that you are happy with it.Ok