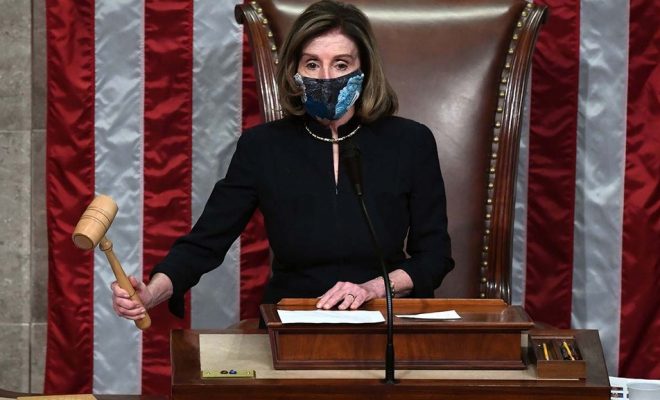 The audience for Wednesday’s historic House action is somewhat smaller than that of Donald Trump’s first impeachment in December 2019.

More than 12 million people watched the House of Representatives vote to impeach President Trump for a second time, according to early ratings figures for Wednesday. CNN drew the biggest share of that audience.
The impeachment vote — the first time in U.S. history a president has faced such a rebuke more than once — passed 232-197 in the house, with 10 Republicans joining the entire Democratic caucus in voting to impeach Trump on a charge of incitement of insurrection over the storming of the U.S. Capitol on Jan. 6.
CNN, Fox News, MSNBC and ABC carried coverage of the House debate and vote from 12:30-4:45 p.m. ET Wednesday, while CBS came on at 4:22 p.m. to show the vote on the article of impeachment. Together, those five outlets averaged 12.43 million viewers; the cable numbers below are final, but for ABC and CBS they’re fast national figures, which don’t include out of home viewing. (NBC also aired coverage but ratings figures weren’t available at publication time.)
CNN averaged 3.95 million viewers over those four-plus hours, topping MSNBC (2.69 million) for the top spot. ABC drew 2.4 million people and Fox News 1.48 million. CBS’ 22-minute special report brought in 1.9 million.
By comparison, the vote on articles of impeachment in December 2019 — which took place in primetime for most of the country — drew about 16.05 million viewers on the big three cable news channels and NBC.
In primetime, NBC’s Chicago dramas returned from hiatus to lead the broadcast networks. Chicago Med (1.03 rating among adults 18-49, 7.62 million viewers) was the most watched show of the night, while Chicago Fire (1.04 in the demo, 7.26 million viewers) led the key ad demo. Chicago PD (0.97, 6.58 million), had its largest total audience of the season.
ABC got a 0.53 among adults 18-49 and 3.38 million viewers from the series debut of its comedy Call Your Mother.
Bookmark THR.com/Ratings for more ratings news and numbers.
Jan. 14, 3:10 p.m. Updated with final cable viewer tallies for the impeachment vote.

Follow @GameSinnersLive
Ray Brady Dead: CBS News Financial Reporter Was 94
‘The Mandalorian’ Tops Nielsen Streaming Chart for Dec. 14-20
We use cookies to ensure that we give you the best experience on our website. If you continue to use this site we will assume that you are happy with it.Ok