The Falcon and The Winter Soldier Could Feature Samuel L. Jackson’s Nick Fury 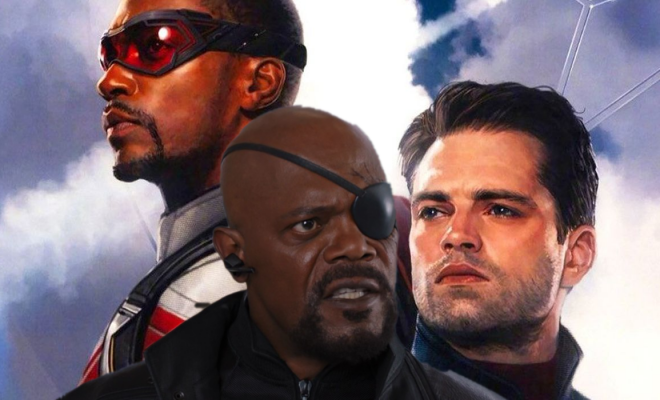 The Falcon and The Winter Soldier Could Feature Samuel L. Jackson’s Nick Fury

Upcoming Disney+ series The Falcon and the Winter Solider could feature one MCU standout: Samuel L. Jackson’s Nick Fury. The Falcon and the Winter Solider is one of several shows that will release on Disney+ in the next couple years. However, the Sebastian Stan and Anthony Mackie series is notable for being the first Marvel show on the new streaming service. It will release this August, with WandaVision coming next in December. Both shows are expected to have an impact on the MCU films, as are the series that will drop in 2021 and presumably, the years to come.
Though The Falcon and the Winter Soldier recently wrapped in Atlanta, filming in other locations continues. Because of this, many set videos and photos have made their way onto the Internet, some of which have teased characters and storylines to come. A recent video seemed to show an action scene involving Bucky Barnes and the comics character U.S. Agent aka Evil Captain America. The series will also reportedly feature yet another Captain America in Isaiah Bradley. As the original black Captain America, he’s expected to have an impact on Sam Wilson’s journey.

Related: How The FIRST Black Captain America Could Fit Into The MCU
Now, it seems another character could join The Falcon and the Winter Solider. In a recent interview with Extra, Mackie spoke about the possibility of a Nick Fury appearance. In response to a question about Jackson stopping by the show, Mackie said, “I hope so. I heard Falcon becomes Sam Jackson, that’s what I heard, so that’s what I’m hoping for.” He also spoke about the likelihood of Jackson appearing in the first season, joking, “We ain’t finished shooting yet, so I hope he just show up one day and bless us with his presence.”

Nick Fury has had a huge role in the MCU. Jackson started out his Marvel career with a cameo in Iron Man before going on to star in several other films. Most recently, he played substantial roles in both the ’90s-set Captain Marvel and Spider-Man: Far From Home. Though he played a present-day Nick Fury in Far From Home, Captain Marvel introduced fans to a younger version of the character. With The Falcon and the Winter Soldier set immediately after Avengers: Endgame and Jackson clearly not tired of the MCU yet, it’s entirely possible he could make an appearance there, too.
It also helps that the MCU movies and TV shows will be very connected. WandaVision, for example, will directly tie into Doctor Strange in the Multiverse of Madness, with Elizabeth Olsen appearing in both. Characters who are introduced in the Disney+ shows are also expected to feature in upcoming movies. The idea is for characters to move between the movies and TV shows with ease, creating a cohesive experience for fans. What better way to start that off than with an appearance by Nick Fury in The Falcon and the Winter Soldier?
More: Every Captain America Rumored For Falcon & The Winter Soldier
Source: Extra

Follow @GameSinnersLive
SXSW Canceled Due to Coronavirus Outbreak
Julie Bowen to Topline CBS Comedy
We use cookies to ensure that we give you the best experience on our website. If you continue to use this site we will assume that you are happy with it.Ok