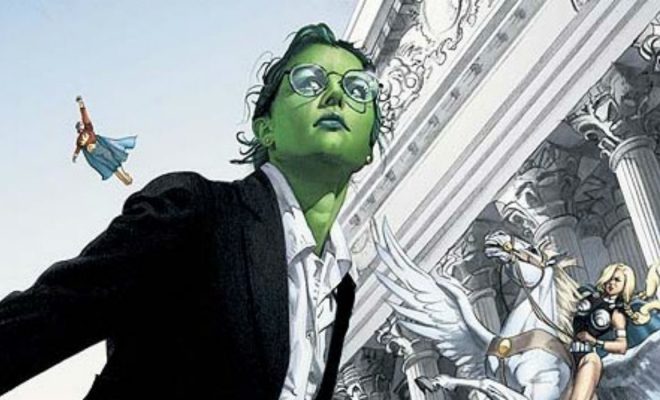 MCU fans now have a better idea of what storylines they can expect on upcoming Disney+ show She-Hulk, thanks to new details from the series’ description. She-Hulk is one of the most anticipated Marvel shows, as it features the popular comics character Jennifer Walters. Since Marvel announced the show last August, information has slowly started to emerge. One big topic of conversation is who will nab the leading role, with GLOW actress Alison Brie an Internet favorite. However, at this time, no one has been cast.
One actor who will likely make an appearance in She-Hulk is Mark Ruffalo, who plays Hulk in the MCU. He confirmed earlier this month he was in talks to take part, though it’s unclear if this would be a one-off appearance or a more substantial role. Following recent news that She-Hulk will reportedly feature a comics-accurate origin story, it makes sense for Ruffalo to appear. In the comics, Walters gets her powers via a blood transfusion from her cousin, Bruce. A January report suggested She-Hulk would begin filming this summer.

Related: Marvel’s She-Hulk Show Can Finally Give Incredible Hulk An MCU Sequel
Per The Illuminerdi, a new description for the series indicates that not only will Jennifer Walters be a lawyer as she is in the comics, she’ll deal in “superheroic law” and be “successful in her profession.” The She-Hulk logline also mentions that “she occasionally throws down in superhero battles as the She-Hulk,” suggesting her superhero persona won’t be the focal point of the show, at least in the beginning. The same report also detailed two supporting characters for She-Hulk: one is Walters’ best friend, while the other is a fellow lawyer. Both may be takes on characters from the comics, though it’s unknown at this time if that’s the case.

She-Hulk is one of several MCU shows for Disney+ that will tie in with the Phase 4 Marvel films. The first wave will include shows with characters who have already been seen onscreen, including Bucky Barnes, Sam Wilson, Wanda Maximoff, Vision, and Loki. The Falcon and the Winter Solider will be the first to air, as it’s scheduled for an August release. WandaVision will then follow in December. After the initial shows launch, Marvel will move on to shows featuring new characters who will likely appear in the movies as well. In addition to She-Hulk, there will be Ms. Marvel and Moon Knight, though none of these have been given concrete release dates.
These new details about She-Hulk help paint a picture of what the show will look like. Fans should be excited to hear there’s every indication so far that the series will follow a comics-accurate storyline. The benefit of launching a character in their own TV show vs. a movie is that it gives viewers more time to get to know them. In this case, it will allow the writers to expand She Hulk’s origin story past the usual amount of time given in a movie. Hopefully, fans will enjoy seeing Jennifer Walters help out her fellow superhero on She-Hulk.
More: Every New Avenger Character Confirmed For Marvel’s Phase 4 (So Far)
Source: The Illuminerdi

Follow @GameSinnersLive
Julie Bowen to Topline CBS Comedy
LeBron James Says He Won’t Play If NBA Enacts No Fans Policy Amid Coronavirus Outbreak
We use cookies to ensure that we give you the best experience on our website. If you continue to use this site we will assume that you are happy with it.Ok