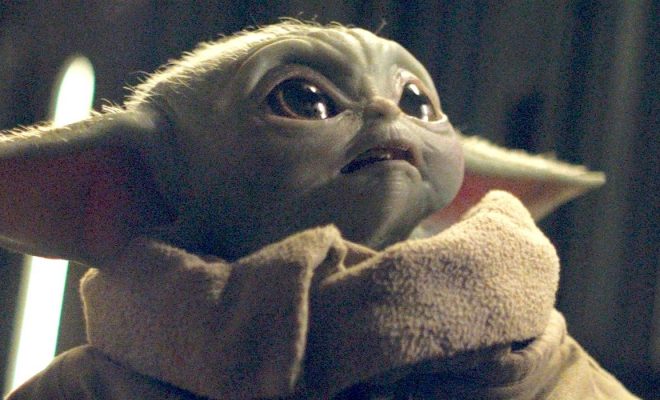 A former Mythbusters star has created an incredibly lifelike animatronic version of Baby Yoda from The Mandalorian. Everybody in the world seems to love the character dubbed Baby Yoda, who was introduced in surprise fashion last November in the last scene of the The Mandalorian’s premiere episode. Indeed, the internet has been practically flooded with Baby Yoda art, memes and other creations ever since the character first arrived on Disney+ (after his existence was kept a secret by Jon Favreau and company).
Given the character’s huge popularity, it’s no surprise that there is plenty of unofficial Baby Yoda merchandise that can be purchased, despite Disney’s efforts to crack down on bootleggers. Real Baby Yoda merchandise is ready to hit stores as well, though reportedly the outbreak of coronavirus in China may actually slow down the supply of Baby Yoda toys from Hasbro’s factories (a minor footnote to what is becoming an increasingly serious story). Of all the Baby Yoda items being made available for purchase, perhaps the most impressive is a life-sized figurine of the character that looks almost too real to be true.

Related: Mandalorian Fans Can Now Pre-Order Their Very Own Life-Size Baby Yoda
Now, Grant Imahara of Mythbusters fame has taken the art of Baby Yoda reproduction one step further by crafting his own animatronic version of the character that looks good enough to actually be used on The Mandalorian. See Imahara’s video introducing his creation in the space below:

Imahara says his Baby Yoda (which is definitely more impressive than the Hasbro animatronic being offered) will be touring children’s hospitals beginning in April, which will definitely be a great treat for the kids. Of course, Imahara first gained fame as one of the cast members on the show Mythbusters, which ran for 14 seasons before being canceled in 2015. Another former Mythbuster, Adam Savage, has himself gained quite a reputation for building movie- and TV-related props, and recently wowed the internet when he built his own Iron Man suit that could actually fly. Clearly, the skills that made Imahara, Savage and company so good at busting myths continue to come in handy in their post Mythbusters careers.
It’s certainly no myth that Baby Yoda continues to be a dominating pop culture presence well into 2020, which definitely raises the stakes for season 2 of The Mandalorian as it gets set to return to Disney+ in the fall. How Favreau and company will handle the character still officially known only as The Child is anyone’s guess, but there are certain to be interesting revelations about where he came from and what his ultimate destiny is. Another certainty is that there will be massive backlash if anything bad happens to everyone’s favorite little green alien. Hopefully Mando will be ready again to take on whoever comes to mess with Baby Yoda.
More: 10 Most Relatable Sleeping Baby Yoda Memes That Will Make You Cry Laughing
Source: Grant Imahara/Twitter

Dan Zinski is a freelance writer currently contributing to Screen Rant on a regular basis. His previous endeavors include writing on sports, general pop culture, celebrity gossip and various other forms of mindless distraction. To date he has left approximately 100 unfinished screenplays in his wake, the majority of which have thankfully been deleted entirely from our plane of existence. He currently resides wherever his head happens to lie. His hobbies include eating Doritos, playing Atari games, avoiding eye contact and drinking excessive amounts of coffee. His favorite actors include Greta Garbo, Humphrey Bogart, Robert Mitchum, Cate Blanchett, Groucho Marx and Richard Burton. His all-time favorite movie critics are Pauline Kael, Manny Farber and of course himself. He regards Rogue One as one of history’s great travesties.

Follow @GameSinnersLive
LeBron James Says He Won’t Play If NBA Enacts No Fans Policy Amid Coronavirus Outbreak
Late Night Lately: Coronavirus Thoughts, Hillary Clinton on Super Tuesday, Ben Affleck’s Birthday Surprise
We use cookies to ensure that we give you the best experience on our website. If you continue to use this site we will assume that you are happy with it.Ok