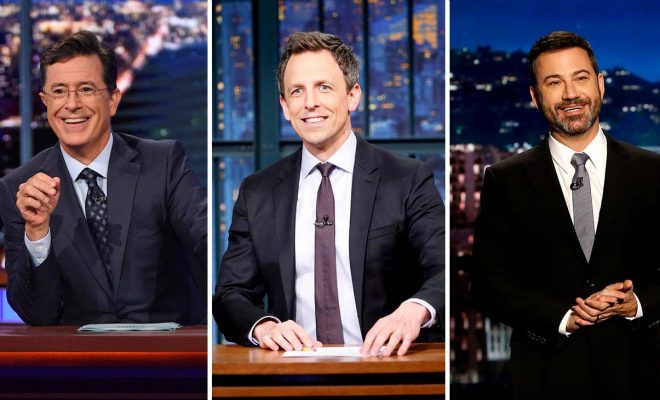 “It is the day after Super Tuesday, also known as ‘Old Man Wednesday,'” Stephen Colbert said on ‘The Late Show.’

Late-night hosts reacted to the results from Super Tuesday during their shows on Wednesday.
Former vice president Joe Biden took the lead with 10 states, followed by Vermont Sen. Bernie Sanders with four .New York City Mayor Michael Bloomberg won a single U.S. territory, though he dropped out of the race the following day.
Over on Jimmy Kimmel Live, the host joked that “Joe Biden has risen from the dead” and that “Super Tuesday was like Easter Sunday for Joe Biden.”
Kimmel added that the biggest surprise of the night was when “Biden revealed he is also the banana on The Masked Singer.”
The host noted that Biden’s victory got off to a rough start when he accidentally introduced his wife as his sister to a crowd of supporters. “I hope they don’t mix up the hotel room keys,” he said.
Kimmel then addressed the long lines that people waited in to vote. “If I’m waiting in line for three hours, I’d better get a Popeyes chicken sandwich at the end of it,” said the host.
“It’s essentially now a two man contest. It’s Joe and Bernie fighting for the nomination like it’s the last bowl of Jell-O at the senior center,” said Kimmel. “And nothing against either one of those guys, but isn’t your late 70s a weird time to start a new job? The only job you should start in your 70s is Walmart greeter.”
“I feel like the reason that we go for the old white guys is because when we were growing up, we’re told that’s what God looked like,” he added.
The Late Show’s Stephen Colbert greeted his audience and announced, “It is the day after Super Tuesday, also known as ‘Old Man Wednesday.'”
After sharing that Biden won in states that he wasn’t expected to be victorious in, Colbert shared the clip of Biden referring to his wife as his sister. “It’s an innocent mistake, but it could still cause trouble if he becomes president,” said Colbert.
The host then put on a pair of sunglasses and did an impression of Biden. “‘Here’s my callback number. 302917- oops that’s the nuclear launch codes,'” he joked.
“Biden was fired up from his big win. Maybe a little too fired up. He can be hard to follow on a low energy day and last night he sounded like they ground up some monkey adrenal glands and just injected them straight into his brain stem,” Colbert said before clips of Biden addressing the crowd followed. The host mocked Biden’s speech by yelling gibberish.
Colbert noted that Biden won in Massachusetts, which is Elizabeth Warren’s home state Biden notably did not visit Massachusetts during his campaign. “If I’m Elizabeth Warren right now, that’s the last time I campaign coherently,” said Colbert. “Next time it’s just going to be ‘Crazy Aunt Lizzie No Malarkey Stream of Consciousness Folksy-Rific Wooden Nickel in Every Garage Campaign-Ganza.'”
During Biden’s rally, animal rights activists stormed the stage and shouted, ‘Let dairy die!” Colbert responded, “Dairy rights activists. I wonder who that is?” The host instructed a cameraman to zoom in on the video clip, which showed Joaquin Phoenix holding a poster.
The host later reflected on Sanders’ poor performance and noted it was because many young voters during show up to the polls. “‘Come on, younglings. Get off your TikTok Snapchats and vote or I will come down to one of the three jobs you are working and slap the vape pen out of your dirty little mouths,'” Colbert shouted while doing an impersonation of Sanders.

Jimmy Fallon recapped Super Tuesday during The Tonight Show’s monologue.
“Last night was Super Tuesday,” he began. “And today for Mike Bloomberg it was ‘Oh My God I Wasted a Billion Dollars Wednesday.'”
The host said that no one saw Biden’s win coming. “Even Jesus is thinking, ‘Wow, this is a crazy comeback,'” he joked.
Fallon later joked about Biden mixing up his wife and sister. “After saying that, Biden automatically won the state of West Virginia,” he said.
After noting that Sanders won in a few states, Fallon added that Bloomberg dropped out of the race following Super Tuesday. “Good news, Mike. Compared to de Blasio and Giuliani, you’re still every New Yorkers favorite mayor,” said Fallon.

Fallon also did impressions of Sanders and Biden during the episode.
The segment opened with Fallon dressed as Sanders addressing the crowd at his rally. “Now listen up, cause I’m only gonna yell this once,” he began. “Was tonight the landslide that we dreamed of? No. Was it the small victory we expected? Also no.”
The clip then cut to Fallon acting as Biden during his speech. “Slap your ass and call me lawyer. We did it,” Fallon told the crowd. “No one thought I’d be standing here on Super Thursday in the great state of what do you call it?”
Throughout the segment, Fallon continued to switch between playing Biden and Sanders.
While in character as Sanders, Fallon said, “It’s still a tight race between me and Joe, so all I’ll say is let the best man win.”
Meanwhile, the host continued to poke fun at Biden’s mix-up of his sister and wife when he accidentally introduced a security guard as his sister.

Seth Meyers dedicated a portion of Late Night’s “A Close Look” segment to Super Tuesday.
Similar to other late-night hosts, Meyers was quick to address Biden’s mix-up. “One of the first rules of politics. You never want to confuse your wife and your sister,” he said. “Unless you’re starring on a reality show on TLC.”
The host then moved on to discuss Bloomberg dropping out of the race. “In the end, he only won one contest and it wasn’t even in one of the 50 states,” he said. “He only won one caucus in American Samoa. These results were so bad for Bloomberg, he said, ‘Screw it’ and drank a Big Gulp while smoking a cigarette inside a bar.”
“Bloomberg spent half a billion dollars and all he got was a nationally televised atomic wedgie from Elizabeth Warren in the debates,” Meyers added.
Now that the race has been narrowed down to two Democratic nominees, Meyers noted that many people are concerned about who is more electable. “It’s insane that we’re still talking about electability three years into the presidency of the least electable person in the history of elections,” said the host. “Donald Trump is like a lab experiment where a bunch of scientists got together and tried to create the most unelectable candidate possible.”

James Corden opened The Late Late Show by discussing Biden’s victory.
“One thing’s for sure. When it happens, those debates between Biden and Trump are definitely gonna need subtitles,” he said.
The host added that Biden has surpassed Sanders in the total delegate count. “What Bernie lacks in delegates, he more than makes up for in crumbled crackers in his jacket pocket,” Corden joked.
Corden also made light of the fact that Biden won in five states that he didn’t campaign in. “It can’t be a great sign that his number one constituency is people who don’t want to see or hear from Joe Biden,” he said. “All Joe Biden has to do is lay low in South America for the next eight months. He’ll beat Trump in a landslide.”
He then addressed Bloomberg’s decision to drop out of the race. “It just goes to show you, you can’t buy the American presidency,” he said. “You can steal it with the help of Russians, but you can’t buy it.”

Over on The Daily Show, Trevor Noah poked fun at Biden excitedly listing off the states that he won in.
“That’s a Joe Biden that we haven’t seen in a while,” he said. “Smiling, full of energy, naming states that actually exist.” Noah added, “We were all waiting for him to give a shout-out to Pennsyl-chusetts.”
“No Joe Biden speech would be complete without a few moments where the Wi-Fi dropped out,” he said before sharing the clip of Biden mixing up his wife and sister. After calling it an “awkward mistake,” Noah added, “If you are gonna talk about your sister wife, you should’ve done it sooner because then you could have won Utah.”
Noah next addressed the animal rights protestors that stormed the stage. During the rampage, Jill Biden notably pushed a protestor offstage. “Stepped in and blocked that protestor like a white lady Jackie Chan,” said the host. “I knew she was a doctor. I just didn’t know her PhD was in ass-whipping.”
He later said that the race is far from over since Biden and Sanders are neck and neck in the delegate count. News coverage followed of Sanders speaking negatively of his opponent during his rally. “That’s right. One of us is a bitch-ass. The other person is me,” Noah said as he mocked Sanders.
“The gloves are officially off. The dentures are in,” the host concluded. “Things are about to get messy between these two. Not just because there’s Vicks VapoRub everywhere. No, because this is the homestretch to find out who will be the Democratic nominee.”

Conan O’Brien shared his idea for Biden’s new campaign slogan on Conan.
After noting that Biden won in many states he didn’t visit, the TBS host suggested that he use the slogan “Vote for me or I’ll come talk to you.”
The host next addressed Jill Biden’s quick response to protecting her husband from the protestors. “Today Melania Trump said, ‘Why would she do that?'” O’Brien joked.

Follow @GameSinnersLive
Taika Waititi Developing Two Animated Willy Wonka TV Shows For Netflix
The Witcher Season 2 Reportedly Casts Game of Thrones Star Natalie Dormer
We use cookies to ensure that we give you the best experience on our website. If you continue to use this site we will assume that you are happy with it.Ok