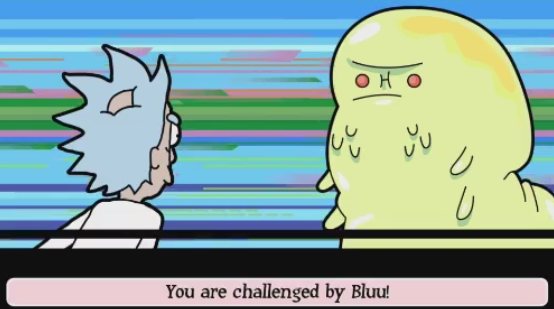 The announcement was made via Twitter that a Pokemon parody game centered around the popular adult cartoon, Rick and Morty, will be gracing the mobile app market with its presence on January 14th:

For those of you who are unfamiliar to the series, the show follows the title characters Rick, a slobbish, rude, and vulgar scientist that’s in a constant state of drunken stupor and has a knack for creating weird inventions, and Morty, his anxious teenage grandson who has two main goals; 1) to stay alive and mentally sane during his grandpa’s often deadly space traveling shenanigans, and 2) to make it through high school.

A GIF was included with Adult Swim Gaming’s Tweet that teased a bit of Pocket Mortys gameplay. It shows a sprite-sized Rick and Morty traveling down an outdoor path, passing by one monster that appears to be guarding a few Morty clones, and then being approached by another monster who then promptly challenges them to a battle. The game’s title is a play on Pokemon’s original name, Pocket Monsters, so it only makes sense that the battle screen shown is a near replica of the familiar Pokemon battle system.

As for the game’s plot, it’s suggested that you’ll be playing as Rick who will be battling against Morty clones by using your own team of Marty clones, catching and collecting more as you progress. Each Morty clone appears to have their own “type”, such as Scruffy Morty. The Morty clones aren’t an entirely new concept; one of the show’s staples is that there are alternate universes where different versions of Rick and Morty exist, and they will bump into one another from time to time. It’s a very clever way to use the show’s canon as a means to create an interesting game parody.

Several other Tweets by Chris Johnston, the show’s senior producer, and co-creator Dan Harmon shared more information, stating that the game will be available for free on iOS and Android devices. Sean Baptiste, the product market manager of Adult Swim, added that Harmon, who also voices recurring character Bird Man, has done voiceover work for the game.

I love writing, and I love video games, so it's absolutely fantastic that I can mush the two together as a career! Some of my favorite games include Bayonetta, Undertale, Final Fantasy XIV, Left 4 Dead, Fatal Frame, and Bloodborne. I always love picking up something new and challenging myself!

Follow @GameSinnersLive
Final Fantasy IX coming to Steam
We use cookies to ensure that we give you the best experience on our website. If you continue to use this site we will assume that you are happy with it.Ok